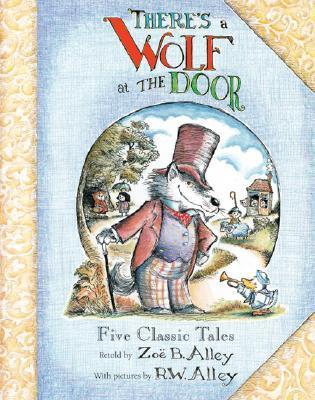 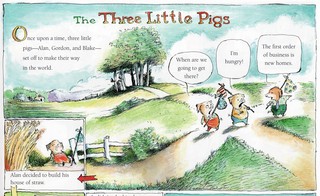 There's a Wolf at the Door

retold by Zoë B. Alley
with pictures by R. W. Alley

You may think you know The Three Little Pigs, but did you know that their names were Alan, Gordon, and Blake? Or, that Little Red Riding Hood was a fashion victim? Or, that The Boy Who Cried Wolf was really just desperate for some decent conversation?

Praise for the book:

"Oversized in every sense of the word, this comic collection of five classis tales -- all tied together by a top-hatted, polka-dot cravatted, waistcoat-wearing wolf -- abounds in graphic gaffaws."

--A Washington Post Best Book of the Year
"This is a giggly read-aloud as well as a snortingly funny read-alone. Hand it to the transitional or reluctant reader, and listen for the laughs."
--Booklist, Starred Review
"Readers drawn by the unusually large trim size and Alley’s animated, loosely posed figures will linger over the snappy dialogue."
--Kirkus, Starred Review
"The adaptations aren’t so much fractured as they are elaborated for an audience primed by snarky TV humor... The wisecracking of the text is both echoed by the comic-strip format of the linked stories and balanced by the delicate drawing and pastoral tints of each panel..."
--The Horn Book, Starred Review

There's a Wolf at the Door

There's a Princess in the Palace
Five illustrated retellings of classic tales of princesses told in comic book/graphic novel format
Enzo Races in the Rain!
This picture book follows the adventures of a puppy named Enzo, and is based on the NY Times best-selling novel, "The Art of Racing in the Rain", by Garth Stein.
Enzo's Very Scary Halloween

This third picture book in the "Enzo" series helps Enzo to understand that there really is nothing to be afraid of on Halloween.

Enzo and the Christmas Tree Hunt!
The second picture book in the "Enzo" series follows the adventures of Enzo and his owner, Zoë, as they search for the perfect Christmas tree.

To learn more about the "Wolf" and "Princess" books and to order your copies!

The site of my fabulously talented illustrator/author husband, known for Paddington Bear and over 100 other books for children!